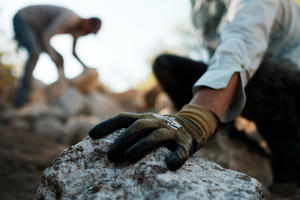 The Cienega Creek Natural Preserve was established in 1986 under a resolution passed by the Pima County Board of Supervisors that authorized the Director of the Regional Flood Control District to acquire designated lands along the Cienega Creek corridor to preserve riparian habitat, reduce peak stormwater flows, and facilitate groundwater recharge.

The ranch lands along the creek had been degraded through historic overgrazing, dirt roads, and sand and gravel mining. In 1974, 20 acres of mesquite-sacaton grassland were cleared, and pasture grasses were seeded to support the herd of horses at the ranch at the Old Pantano settlement site. Pima County started restoring the area in the late 1990s, and today it looks much like the surrounding landscape. 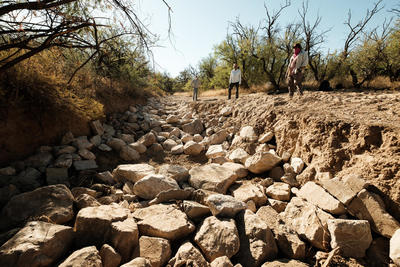 In the mid-2000s, a section near the restoration site started to erode, and by 2015 two 12-15 foot gullies had formed. In 2018, WMG prioritized this site as erosion was sending too much sediment into Cienega Creek.

This year, with funding from the Arizona Department of Environmental Quality, and in cooperation with Regional Flood Control, WMG spent four days using heavy equipment and volunteers to build a series of rock dams and a very large Zuni Bowl to stabilize and stop the gullies.