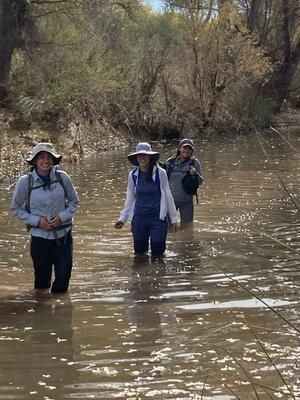 This November and December, WMG launched its first-ever Binational Beaver Survey - an on-the-ground effort to assess how many beavers are living along the San Pedro River and some of its main tributaries on both sides of the U.S.-Mexico border. In the late 1800's, beavers were exterminated from the binational San Pedro River. Twenty-one years ago, they were introduced into the San Pedro National Riparian Conservation Area in Southern Arizona. Since then their population has grown, expanded into Mexico, and then shrunk in numbers in the U.S. The data that was collected will provide information needed to support healthy beaver populations along the San Pedro long-term so that beavers can encourage healthy ecosystems by slowing down river flow, sinking groundwater, recharging the aquifer, and restoring wetlands and river habitat.