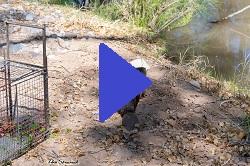 On Friday morning, WMG helped release a beaver into a new home along the San Pedro River. Critter Control, a private animal removal company in Northern Arizona, was called to remove a beaver along a river in the area because the landowners didn’t like the beaver chomping on their cottonwoods. Critter Control needed to find a new home for the beaver in short order, or the animal would be euthanized.

Thanks to Executive Director Lisa Shipek’s flurry of phone calls, she was able to connect them with a private property owner along the San Pedro River who was happy to have the beaver released on her property. The site has a deep pool, year-round flow, and plenty of cottonwoods. In fact, beaver had lived there before, evidenced by an old bank lodge, and are currently within a mile downstream. This was a huge relief after learning there were no ready-to-go opportunities to release the beaver in a new location through Arizona Game and Fish Department (AZGFD) and that the beaver had been in captivity for a week.

The release went well, with lots of excitement and joy from those in attendance. Lisa was one of the four people who helped bring the beaver down to the river. The upside: if our new beaver friend from the Verde River can reproduce, he will bring more genetic diversity to the San Pedro beaver population. We suspect there is a second beaver, perhaps a mate, that may be removed from the same property along the Verde. We hope the pair can be reunited together along the San Pedro!

Through our Release the Beaver campaign, we want to make sure all beavers have a home and never have to be euthanized in AZ. Part of being a beaver believer is helping educate people on why we should let beavers do their work to transform our desert environment into vibrant riparian corridors.

Thanks to Ron Stewart for the photos
.