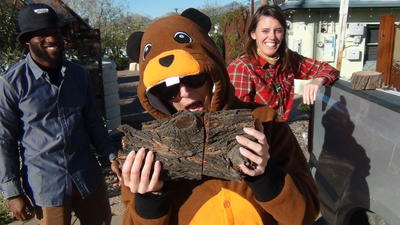 Whoa, beaver dam! We’ve pulled out all the stops for our year-end video spoof  – remaking the #1 song of the year – Old Town Road – a country rap song that topped the charts for a record-breaking 19 weeks. Whether you’ve heard it 100 times or you’ve miraculously dodged pop culture and missed it, I guarantee you’ll be singing along to our version. The beavers are counting on it!

This video is in honor of our river restoration work and Release the Beavers campaign.

The spoof is called Beaver River – once the name for the San Pedro River – when beavers dominated the river before being wiped out by poachers in the 1800s.

I’m hopeful that beavers can once again claim their namesake and be prominent species in the San Pedro and Santa Cruz watersheds. The video spoof was filmed at several locations, including a section of the Lower San Pedro where beavers have migrated since being reintroduced to the San Pedro Riparian National Conservation Area in 2000. Over many years the beavers have spread out and found their way to new locations, creating dams in several locations off river. WMG’s team visited the location earlier this month and was amazed by the wetlands and riparian habitat created by the beaver’s industrious dam construction.

Want to get directly involved with this work? Join WMG’s River Run Network and learn more about our Release the Beavers campaign.