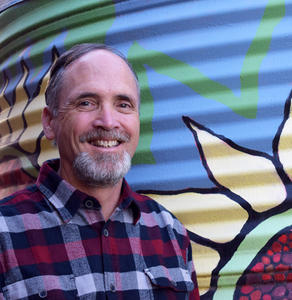 Richard Roati, a Green Living Co-op member since the beginning of the program 10 years ago, first began water harvesting in 1992 by utilizing laundry water for the fruit trees on his property.

“When I found out about WMG’s Co-op program, I was super excited that water harvesting know-how was becoming accessible to me and to everyone. I remember attending workshops right away. I attended workshops at the park at Broadway and Country Club and several homes. I was so happy when my proposal to construct a cistern in my backyard was accepted in June 2008.”

“(At the Co-op workshops), everyone is super enthusiastic to work together because they are learning useful skills. Yards are transformed in a few hours into beautiful landscapes. Participants quickly realize if they were to do the work by themselves it would take months to complete the same work. The homeowner benefits because they get a group of volunteers and a discount on the price. The volunteers get free hands-on training. Neighbors see how yards are transformed and are interested in getting involved. It’s an amazing example of how a good idea can multiply into a great success. WMG is leading the way to a greener, more sustainable future for the City of Tucson!”