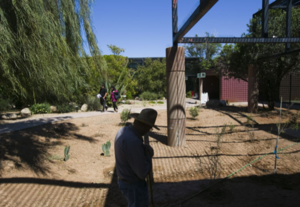 The Xeriscape Demonstration Garden in front of the Glendale Main Library was fairly cutting edge when unveiled in 1992.

Over the years, though, city officials and those who maintained the garden realized rainwater headed down its slopes too easily, degrading the pavement instead of nourishing the plants.

Glendale partnered with the Watershed Management Group to revamp a portion of the garden to the west of the north entrance.

“The typical landscape thinking at that time was to mound a lot and create pristine landscapes from the mounding,” said Jo Miller, Glendale’s environmental program manager. “We’re kind of inverting that. We’re turning the mound around. We dug out basins to help water the plants and capture the rainwater.”