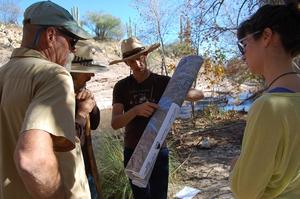 During a period that stretched primarily between the 1940s and the 1960s, Tucson’s water table ultimately began to drop and its local perennial streams, creeks, and rivers started drying up. Today, as most Tucsonans know, what remains of our once-flowing rivers are largely dry wash beds that only see water during heavy storms, or when they are recharged directly with wastewater.

According to Catlow Shipek, Policy and Technical Director for the local non-profit Watershed Management Group (WMG), in 1908 at the confluence of the Santa Cruz and Rillito Rivers, even when there was no water flowing above ground, the water level could be found just five feet below the surface of the earth—or ten to fifteen feet during the dry season—which was enough to support riparian vegetation like cottonwoods and willows. Today, the water level in that same area hovers at a depth somewhere between 100 and 150 feet underground in most places.