Public and nonprofit entities respond to pandemic struggles among homeless 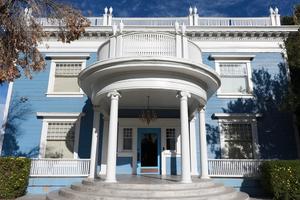 COVID-19 is continuing to devastate communities all across the United States and the world. Arizona is now ninth in the U.S. in confirmed COVID-19 cases and this growth is not projected to slow down.

Marginalized communities have been disproportionately burdened with the virus, and one of these groups is the homeless population.

Despite the assumption that the homeless can isolate easier, people working in the front lines of homeless aid during this time have seen COVID-19 take a disproportionate toll on homeless populations.

A lack of available healthcare, housing and systemic mistreatment of the homeless leads figures like Tom Hill, an instructor of sociology at the University of Arizona and the senior administer of the Z Mansion WORKship facility in Tucson, to identify these public health disparities.

“The homeless, as a marginalized population anyhow, are really right on the outskirts of the health system,” Hill explained.

According to Hill, race and housing status are two factors that play a significant role in the treatment disparities that exist during this time. He explained that this mistreatment is inherent to the system.

“If you are a homeless male over the age of 18, your rate of traumatic brain injury by assault is 100 times that of a standard housed person, and if you are Black or hispanic, your rate is even higher,” Hill said. T

om Litwicki, the CEO for Old Pueblo Community Services, said that during the pandemic, it is possible that race and ethnicity could play into pandemic effects on the homeless because of the locations of homeless shelters.

He described that communities with greater levels of poverty, which typically have larger racial and ethnic minority populations, will have less pushback against the development of homeless shelters. So, homeless shelters become more abundant among minority populations and the virus could potentially spread easier because of the density of people who use their services.

Hill said that as the pandemic developed, his organization was able to predict who would be more vulnerable to the illness — two of the factors were being over 60 and being Black. With this prediction, the team was able to act proactively and get many people in early who were in need of aid.

The organization Hill is involved in, Z Mansion, is a Tucson wedding venue known for providing food, clothes and aid to the homeless and was one of the first social organizations to try and address COVID-19 within the homeless population. Hill said the organization put a plan in place for the pandemic as early as January 20 when the first COVID-19 case hit the U.S.

“We did it early because we’ve been around a long time, we were here during the H1N1 pandemic, and we had practiced for that, it's something that we teach,” he explained.

The health assessments are being done by certified community health specialists, many of which are medical students at the UA.

In Downtown Tucson, most of the homeless population is well-assessed because of the Z Mansion WORKship facility and its volunteers. While it provides food for hundreds of people, they also have a team that goes out and provides brief medical assessments, according to Hill. The people who have shown to have COVID-19-like symptoms have been able to come in and get help from the organization.

Other than that, Hill said that most, even almost all of the homeless people in Tucson that end up with COVID-19 are left untreated.

“Once you push away from downtown, there are literally no medical teams going out to those people,” Hill said.

At the beginning of the pandemic, the WORKship team was already prepared with tents, plans, personal protective equipment and many of the tools and resources needed to jumpstart an alleviation process for COVID-19 within the homeless population.

Hill also said during this time, the organization also tried to help the Pima County Health Department and the health system in Tucson to understand what may be to come.

Though many were in denial that the pandemic would grow to be so horrific, Hill said Pima County was motivated to come up with ways to prepare for the homeless crises during the pandemic.

“They proactively formed a group to look to see what to do for the homeless during the pandemic,” Hill said.

Even though it took an “excruciating amount of time,” according to Hill, the local government came up with a plan to introduce two hotels, one for homeless people without the virus and one for those with it.

Hill said he is worried that as federal funding goes away and government officials begin to show less concern about the pandemic, these homeless hotels will not be able to continue to operate.

“We will have all of these people who are in housing, which is great and the best possible thing you could do, and they’re going to be let out and they will have nowhere to go,” said Hill.

Pima County’s homeless hotels align with a solution that leaders in homeless care have posed: the expansion of Housing First initiatives.

Housing First is an evidence-based philosophy that prioritizes providing safe, individual housing as a way to alleviate homelessness, empower homeless communities and save money.

According to Litwicki, preventative care should be the main priority during times of COVID-19, and Housing First initiatives are a proven way to pursue this effectively.

“The biggest prevention you could have is housing, and housing is a lot cheaper than the cost of emergency room visits and hospitalizations,” Litwicki said. “It's the cheapest and most impactful intervention that anyone can make when talking about homelessness.”

“With this pandemic and the potential for other pandemics to follow, the idea of putting a large amount of people in shelters is not tenable,” Litwicki said. “It's really about shifting the system from one that’s compassionate in its nature but does not resolve homelessness.”

Hill said something being considered in Tucson is a defunding of the police and an allocation of some of that money toward developing Housing First initiatives in Tucson.

He said he believes that this is a financially responsible strategy which would ultimately lead to money saved in the medical, police and social service systems.

“People, when they hear about changing funding and respond with, ‘Oh my gosh, it's going to make us less safe,’ they need to understand that if you give people housing, it will save the entire system an insane amount of money, both medically, through police presence and through the services that are rendered to the homeless, ” Hill said.

For the last year and a half, Old Pueblo Community Services has worked with the Pima County Criminal Justice Reform Unit on a Housing First program to both uplift the homeless community and to address the financial stresses described by Litwicki. With $1.5 million in annual funding from Pima County, this program provides housing for recently incarcerated homeless people.

According to Wendy Petersen, the assistant county administrator for justice and law in the Criminal Justice Reform Unit, people are eligible for housing in this program if they have been incarcerated in the Pima County jail two or more times in the previous 12 months.

They also must be identified to have a substance abuse problem or mental illness — or both. Of course, those eligible must also be homeless, but Petersen said that this could be as broad as couch surfing with a friend.

Upon this initiative, the Criminal Justice Reform Unit also set up the Jail Population Review Committee.

“The committee meets once a week to try to determine if there are people in the Pima County jail who could be released early and safely instead of just sitting in jail waiting for their case to be tried,” Petersen said.

The committee was concerned about the people who would be getting out of jail through this initiative and would not have anywhere to go, according to Petersen. Therefore, they set this up as a referral pathway for people to get set up with Housing First. People are also referred to Housing First from the Pima County Adult Probation Department, the Public Defenders Office and the Tucson Police Department and Pretrial Services.

Petersen emphasized that there has been quite a number of success stories in being able to provide safe, clean housing to the recently incarcerated homeless.

She said that this program has helped people motivate themselves to beat addiction, and it has even given mothers a safe place to give birth to children away from Pima County jail cells.

During COVID-19, this Housing First program is keeping people out of the jails and providing individual housing, removing much of the risk of virus spread.

“These are people that don’t go back into the jail, so if they have or don’t have symptoms they aren’t going back into the crowded conditions of the jail so there’s little to no risk of spreading the virus that way,” Petersen said.

Alejandro Martinez, the program coordinator for Housing First, said there are efforts to reduce the number of people in jails to limit the spread of the virus. “

There has been a focus on making sure we reduce the jail population to make sure that in the event that somebody is infected, that people can isolate properly,” Martinez said.

In times of the pandemic, it is not only Pima County and organizations like Z Mansion and Old Pueblo Community Services stepping up to help the homeless.

With funding from the Kaimas Foundation, Watershed Management Group has been buying materials to build tippy-taps in bulk and constructing multiple at a time. The organization has then been dropping off these hand washing stations to schools, homeless communities, shelters and facilities that deal with feeding the homeless.

Dominick Abbott, a project designer for Watershed Management Group, said that these tippy-taps may be effective in reducing the spread of the coronavirus among homeless populations because of their setup.

“The only part of the device that you actually need to touch with your hands is the soap,” Abbott said. “It’s a great way to sanitize a large group of people without having anything that has potential to spread the virus before or during the sanitization process.”

Abbott, while working for an organization that has expanded its realm to help vulnerable communities during this time, believes that all organizations should strive to do this as well, even if assisting the marginalized is not at the forefront of their missions.

“It’s a time that we really need to be able to work together as a broader community," Abbott said, "to try and ensure that we take care of the most vulnerable among us, and that we do what we can to ensure that people stay safe and healthy."

Public and nonprofit entities respond to pandemic struggles among homeless