Home > Newsmedia > Local Opinion: As Tucson-area rivers are reborn, we can do even more to help them flow

Local Opinion: As Tucson-area rivers are reborn, we can do even more to help them flow

The following column is the opinion and analysis of the writer. 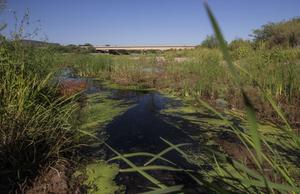 The good news keeps coming for our rivers this year. In June, we celebrated the launch of the Santa Cruz Heritage project, releasing recycled water into the river to support perennial flow through downtown Tucson. Now we learn another stretch of the Santa Cruz River has regained flow, but this time it is groundwater supported!

Tony Davis’ article in Sunday’s paper shared an insightful story of how the Tohono O’odham fought to gain water rights in the 1970s that allowed them to recharge Central Arizona Project water on their lands and replenish groundwater that had been pumped in excess by the non-indigenous population. Rising groundwater levels have allowed the river to resurface, with a half-mile stretch flowing now for one year.

It’s not just the Santa Cruz that is being reborn. I have good news to share from other parts of our watershed. The nonprofit I direct, Watershed Management Group, has been monitoring creek flows across the Tucson basin since 2017. Our community scientists have observed perennial stretches along both Sabino Creek and Tanque Verde Creek, including three years of continuous flow along one stretch of Lower Sabino Creek as well as rising groundwater levels nearby.

This winter, community scientists recorded 50 consecutive days of flow along the lower Tanque Verde and upper Rillito River. While this year’s flow was fed by above average rainfall and snow accumulation, historically this stretch of the river had groundwater supported flow for most or all of the year, up until the early-1900s.

Ciénega Creek, a tributary that ultimately connects with the Santa Cruz River, has two reaches with year-round flow. The creek’s flow is substantial enough that it is being considered as a location to reintroduce beaver in 2020.

Imported water from the CAP has allowed Tucson and surrounding communities to stop overpumping groundwater and restore groundwater levels in locations across the valley. I’m pleased to see some of this recharge occur near our rivers, and I encourage our watershed planners to strategically recharge more CAP and recycled water in or alongside our rivers to support flow.

Looking forward, our community should embrace the potential of local water supplies to meet our water needs and restore our region’s heritage of flowing creeks and rivers. Our local water resources include rainwater, greywater and stormwater, in addition to recycled water. Rainwater harvesting systems can typically supply all residential and commercial landscape water demands and have been shown to meet indoor residential water needs as well.

Water harvesting has quickly grown in popularity with Tucson households and these solutions can be scaled up to reduce our municipal water demands in the face of climate change and dwindling CAP water supplies.

The city of Tucson took a big step forward in utilizing local water supplies with the recent approval of the Green Stormwater Infrastructure Fund. Tucson’s mayor and council gave direction to Tucson Water to move forward with implementing the $3 million to $5 million annual fund devoted to install and maintain public green infrastructure. The fund will substantially scale up our ability to collect and infiltrate stormwater in urban areas, supporting an urban forest as well as recharging more groundwater.

Our rivers are being reborn after a century of decline. This is a defining moment for all the communities that live in our Santa Cruz Watershed. We should rejoice alongside the Tohono O’Odham Nation and work with it to restore flow to our rivers and quicken our pace towards a more resilient future. Each of us has a part to play, as we reduce our dependence on imported CAP water, to cultivate our local water supply and scale up conservation efforts.

As Tucson-area rivers are reborn, we can do even more to help them flow