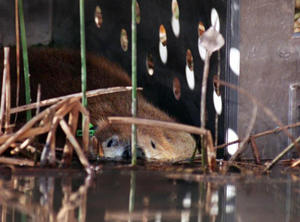 In response to Sunday’s article “Dam shame: Beavers face 2nd extinction on San Pedro River,” I am disappointed to learn that neither the Bureau of Land Management nor the Arizona Game and Fish Department knows what is going on with the American beaver in the San Pedro Riparian National Conservation Area.

The reintroduction of the American beaver by BLM and AGFD 20 years ago along the San Pedro River was thought to be largely successful until recently. This is concerning news for the San Pedro population as well as the potential beaver reintroduction in the Santa Cruz watershed.

As the River Restoration Biologist for Watershed Management Group (WMG), I have been supportive of the BLM’s efforts to release an Environmental Assessment for the reintroduction of beavers on Cienega Creek in Las Ciénegas National Conservation Area. The beaver reintroduction efforts are based on BLM’s and AGFD forward-thinking work to protect and preserve the natural resources of the San Pedro River and Ciénega Creek.

The American beaver is a keystone species, often referred to as nature’s engineer. Beavers alter aquatic and riparian (stream-side) ecosystems for the better and we need them to help us restore our heritage of flowing creeks and rivers. This is especially important in the face of a changing climate and additional groundwater resource pressures from mining, land development and other uses.

I am concerned to read of the BLM’s Scott Feldhausen’s response in Sunday’s article suggesting the BLM “shelve” the reintroduction of beaver in Las Ciénegas after questions have been raised by the media about the project. As Feldhausen observed, it is incumbent on land and wildlife management agencies to monitor, manage and report the status of these resources to ensure they are preserved for future generations. I see the San Pedro beaver decline as a learning opportunity to inform future restoration efforts in both the San Pedro and Santa Cruz Watersheds.

I urge the agencies to commit resources to assess the fate of the San Pedro beavers and stabilize the population, develop an adaptive management plan based on continued monitoring, and continue to move forward with the Environmental Assessment process for a Ciénega Creek introduction.

The Beaver Lab at Utah State University has developed robust monitoring methods and states, “Stream restoration is common but monitoring their benefits is rare. Therefore, monitoring a rare restoration approach (i.e. working with beaver) is essential for us to learn how to use this approach in the future.” This lab and its scientists have documented amazing restoration successes in arid lands when beavers are at work, and we need to see such successes here in Southern Arizona if we want our grandchildren to know flowing creeks and rivers.

WMG has been celebrating the reintroduction of American beaver in recent educational work as an important milestone in our 50-year vision to see Tucson’s heritage of flowing creeks and rivers restored. At WMG’s Beavers, Brews, and Santa Cruz event in September, 250 members of the community came out to learn about the beaver’s ecology, impacts and potential introduction to Ciénega Creek.

It is only through collaboration, coordination and commitment that we will be able to achieve such ambitious goals as the restoration of the aquatic and riparian ecosystems that first allowed people to settle in the Tucson basin over 5,000 years ago. On behalf of all the beaver believers, I encourage the BLM and AGFD to invest energy into ensuring the long-term success of the San Pedro beavers, as well as continue on the path to reintroduce beavers in the Santa Cruz watershed.