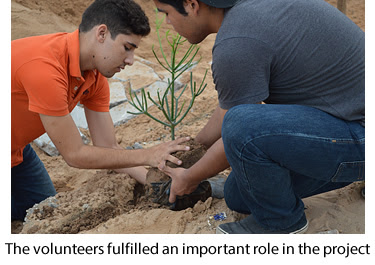 From September 9th through the 11th, 2015, the Border Environment Cooperation Commission (BECC) and the North American Development Bank (NADB), in coordination with the City of San Luis Rio Colorado, Sonora, launched a Green Infrastructure project for demonstration purposes. This was a volunteer work management exercise unprecedented in the history of the two institutions. The project’s goal was, after providing training on green infrastructure concepts, to implement a green infrastructure project using native plants along 150 meters of a media along a local boulevard. This project received about US$10,000 in funding from the BECC’s Technical Assistance Program.

Training was provided the first day to municipal officials, professionals, high school and university students, and members of the community, regarding the incorporation of green infrastructure components to existing urban infrastructure through the implementation of a project as a case study. The second day, portions of a median, which is located within a project that was financed with a loan through the NADB, was planted with native species such as mesquite, palo verde, and various cacti. This project intends to demonstrate that rainwater harvesting in arid regions such as the selected area, ensures the continuity of naturally occurring ecological processes and directly improves the quality of life of area residents.

The training workshop was conducted by Joaquin Murrieta, from the Watershed Management Group in Tucson, Arizona, a consulting with extensive experience in the development of green infrastructure projects in arid regions of the Sonoran Desert. The workshop had about 80 attendees, including college students, municipal officials responsible for local utilities, non-governmental organizations representing the community and professionals interested in the subject.

The training included education on passive rainwater harvesting and reuse systems, as well as details regarding the construction of these systems and an explanation of the importance of native vegetation for restoring regional ecosystems; harvested rainwater collection, and associated positive impacts on the environment.

During the second day, trained volunteers used the skills they acquired the day before to implement green infrastructure elements for demonstration purposes in a 150 meter-long median on Boulevard Juarez, across from the San Luis Rio Colorado Technological University. With the active participation of the volunteers, the task was completed in four hours, a record time.

The morning of the third day, the project was formally launched during the inauguration presided by Mayor Leonardo Arturo Guillen and BECC General Manager, Maria Elena Giner. The event was attended primarily by the students and volunteers who participated in the demonstration program. 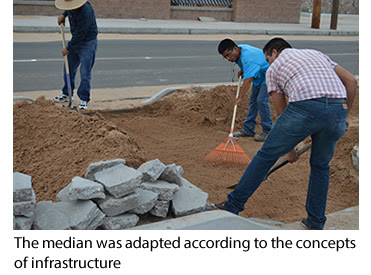 During the ceremony, Joaquin Murrieta said this project shows how to optimize rainwater reuse with native plants that only require watering during their first 18 months and grow to full size within five years.

BECC’s General Manager told youth in attendance that climate change is happening in their lifetime, and it is up to them to improve the planet, as exemplified by this project, which is a model to be replicated. “We are leaving you this reminder of a change in paradigms, of how we can implement new things on sidewalks and medians," using green infrastructure elements, she said.

The City Mayor closed the dedication ceremony by emphasizing that everyone who worked together on this project accomplished a major achievement. In an interview, he added that “modern-day San Luis Rio Colorado could not have been achieved without the assistance provided by the BECC and NADB” for wastewater collection and treatment, solid waste, and street paving projects that have been built in this municipality.

For video (Spanish only) of the event, please use the following link:
http://www.becc.org/news/videos/green-infrastructure-in-san-luis-rio-col...

For media coverage of the event, please use the following link:
https://meganoticias.tv/video/SAN-LUIS-PIONERA-EN-INFRAESTRUCTURA-VERDE-...