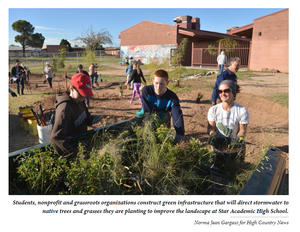 On a cool morning in mid-November, about two dozen volunteers and students work in a shallow basin behind Star Academic High School, a school on Tucson’s south side, shoveling out piles of dirt and placing rocks in front of a drainage designed to capture rainwater from the school’s roof. One teenage girl uses a hammer drill on the hard dirt, creating a hole big enough for a young tree, while other students spread mulch and plug native grasses into the basin.

The landscaping will beautify the school’s barren lot, but the project’s real goal is to add shade and natural vegetation to one of the hottest parts of this desert city. Trees and plants have a dramatic cooling effect in urban environments, and researchers say they’ll be critical safeguards for the health and well-being of residents as temperatures continue to climb.