COVID-19: How a “Tippy-Tap” could help homeless wash hands

Tucson homeless population could be the forgotten element in our defense against COVID-19, but now donated effort, and some very basic engineering is 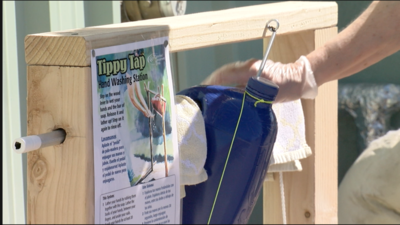 giving them a better chance to wash their hands and better defend against spreading the virus.

Living on the street is a hard and dangerous life even under normal circumstances. Now, part of the COVID response has made it even harder for the homeless people to get any sort of clean up and reduce their chances of spreading the infection.

At the Sister Jose Women’s Center on South Park Avenue they’re still offering bag lunches to women who live on the streets, but social distancing keeps them from offering a chance to clean up.

But the shelter just received a clever device that can help. It’s called a tippy-tap. They’re widely used in India and Africa to make basic handwashing more available. The U.S. Centers for Disease Control offers plans on how to build one.

Watershed Management Group built a batch of them and is bringing them to the Sister Jose Shelter and many others around Tucson.

Dominick Abbott of Watershed Management Group says, “It allows people to wash their hands with using a foot pedal so essentially they're not touching anything else. Aside from the soap to sanitize themselves on pretty much reducing the race of the spread of germs and other viruses in this crisis,”

He says, “This is simply giving you the opportunity to do what you and I do at home, wash your hands before eating, and hopefully we make a dent in the community spread and that's what we're concerned about right now.”

And he says there’s an effort to bring the Tippy Taps beyond the shelters to informal camps where many homeless people live.

COVID-19: How a “Tippy-Tap” could help homeless wash hands