Starting Thursday, Feb. 6, beer enthusiasts across the state will rejoice in their love for a good brew. 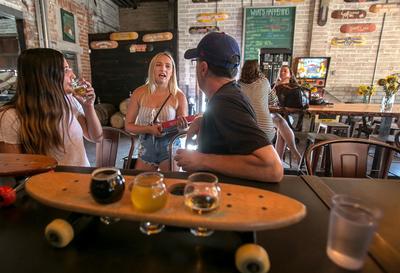 Arizona Beer Week — which is actually longer than a week, ending Feb. 16 — is celebrating its 10th anniversary this year.

The week of beer appreciation includes more than 200 events across the state, including the flagship event, the Arizona Strong Beer Festival in Phoenix. More than 30 festivities will take over Tucson bars and breweries.

Here are some local highlights. Find the full list of events at arizonabeerweek.com.

1912 BREWING CO., facebook.com/1912brewing, 2045 N. Forbes Blvd.If an event surrounded by only beer isn’t enough to entice you, add some bacon into the mix. On Feb. 7, 1912 Brewing Co. will offer three different kinds of beer, paired with bacon.

The brewery will also host a Wednesday, Feb. 12, four-course dinner with The Parish that includes barbecue shrimp and a white cheddar grits tamale, in addition to beer pairings.

CROOKED TOOTH BREWING CO., facebook.com/crookedtoothbrewing, 228 E. Sixth St.Crooked Tooth Brewing Co. is hosting several events during Arizona Beer Week, from a painting party with the Tipsy Picassos on Sunday, Feb. 9, to an in-depth tour of the brew house, with a flight of beers, on Monday, Feb. 10.

If you’re hoping to take your love for beer to the next level, a beer crawl is a worthy option.

After purchasing your ticket, here’s how it works: On Feb. 15, the day of the crawl, hit the check-in spot to get a wristband, a commemorative tasting glass and a map of the participating brewers. From there, get to drinkin’.

Tickets are also available for designated drivers at $8, though no drink samples will be given.

A portion of the proceeds from the beer crawl will benefit Watershed Management Group, Arizona Craft Brewers Guild and the Rialto Theatre.

Whether you’re in it to compete or just to have fun, tickets are priced at $20. In addition to the beer and entry to the race, tickets also get you into the after party, which includes a DJ, food trucks and a bloody mary bar.

Tap & Bottle is also hosting other events during Arizona beer week, such as a Tuesday, Feb. 11, dinner with Boca Tacos y Tequila.