Home > Newsmedia > Beyond Homework: Giving Refugee Youth a Sense of Belonging through Art, Nature, and Community

Beyond Homework: Giving Refugee Youth a Sense of Belonging through Art, Nature, and Community 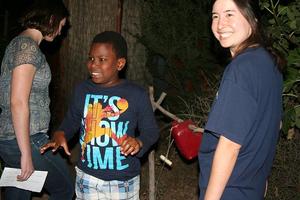 Once, Marge Pellegrino and a handful of volunteers took nine refugee youth to Mt. Lemmon to see snow. Within minutes they were jumping, sliding, and tossing it. “It was magical to watch them negotiate this thing they’d never seen before,” Pellegrino said.

Helping refugee youth to negotiate and thrive in new environments is the mission of several organizations in Tucson. We reconnected with Pellegrino of the Owl & Panther Project, program of the Hopi Foundation, founded in 1995, and with Julie Kasper, of Lutheran Social Services of the Southwest’s K-12 Refugee Education Services, who coordinates an afterschool center for refugee youth. Both programs seek to create a sense of belonging for youth who have been resettled in the United States from countries facing war or other challenges.

In a 2015 edition of BorderLore (here), we reported on the work of Owl & Panther and focused primarily on their healing expressive arts programming. An ongoing exhibit of youth artwork fills the new entrance to the Tucson Museum of Art gift shop.  And if you make it to the Museum’s current exhibit, Dress Matters, you’ll see several works with accompanying poetic responses from Owl & Panther youth.

But the organization also serves refugee youth by providing time in nature and creating opportunities for community service.

Aside from the Mt. Lemmon snow finding escapade, the organization regularly visits outdoor sites to create a greater sense of belonging among the youth. They’ve visited venues such as the Arizona Sonora Desert Museum and stood with saguaro cacti at Gates Pass. They’ve also planted and picked crops for Tucson Village Farm and assisted with Watershed Management Group’s green infrastructure workshops, learning about how harvesting rainwater can help both local landscapes and the desert around them, Pellegrino said.

Service work gives participants the opportunity to further connect with the larger community, Pellegrino said. The youth have worked to clean up community Hopi gardens, and every December, they make cookies and write poems for kids living in shelters. “They love that so much. Being able to help others makes them really feel part of the community,” Pellegrino said.

The program emphasizes a long-term commitment to youth and pairs its volunteers one-on-one with youth participants. This makes for a deep impact on the participants, Pellegrino said.

Indeed. New research by the University of Arizona’s Bureau of Applied Research in Anthropology (BARA) has yielded powerful discoveries about both the short- and long-term impacts of Owl and Panther’s work on the lives of refugee youth.

BARA’s research found that over the short term, youth gain skills in self-expression through multiple literacies, collaboration across generations and cultures, and critical thinking. Over the long term, participants improve their confidence and empathy, gain greater ability to self-correct or moderate, learn persistence at task completion, and gain more knowledge of the Tucson community.

While all youth would benefit from this kind of attention and care, Pellegrino says refugee youth are particularly vulnerable. We know what happens to people’s bodies and psyches when they’ve experienced trauma. But their trauma can continue. It isn’t just having seen the war. It’s also what happens when they have to come to a new country. There is resettlement stress, then stress around acculturation.

Many experience a sense of isolation, which is exacerbated by PTSD and xenophobia. “Some of the rhetoric we’re hearing in the country right now can re-traumatize. They hear horrible things being said about them by people in power,” Pellegrino said.

Such stresses can impact young brain development. Pellegrino said sometimes such youth are misdiagnosed with attention deficit and hyperactivity disorder (ADHD) and end up getting medicated for a condition that isn’t medical.

Which is why programs like Owl & Panther can make such a significant impact, she said.

And because youth in the program never have to officially graduate, Pellegrino said, they can maintain a sense of belonging for as long as they want it. Along with, according to BARA’s findings, a greater sense of stability and community, more resilience, and an ability to advocate on behalf of refugee contributions to the larger community.

Lutheran Social Services of the Southwest’s K-12 Refugee Education Services also works to create a sense of belonging for refugee youth. Their afterschool program is run by Julie Kasper, a former ESL teacher at Catalina High School, who serves as a liaison between refugee resettlement agencies and school, helping them find ways to collaborate and offer meaningful activities for students who often feel isolated and out-of-place.

“My students at Catalina felt isolated. It was hard for them to connect with Tucson. Often they didn’t leave their immediate neighborhood, schools, or apartment complex,” she said.

On top of the trauma they may have already experienced, refugee students experience a lot of isolation, loneliness, and depression, Kasper said.

The afterschool program was thus born out of a community need, Kasper said. “When I left Catalina, I had the idea to start a school to serve immigrant and refugee kids. But when I talked with kids, parents, and colleagues, no one was asking for a school. Everyone was asking for a place where people could come to get questions answered and gather.”

So that’s what she created. The afterschool center shares a building with the Imago Dei School at 55 North 6th Ave. Suite 101, right across the street from the Ronstadt Transit Center. “It makes it easy for kids to get there from all over the city,” she said.

Students come to the afterschool center primarily for homework help, but it also serves as a gathering place for refugee students and families.

Volunteers, who go through a special training before working with youth, have helped start clubs, such as the art club and the dancing club for students to focus on particular expressive activities.  There’s also a language club, where kids can speak and learn Swahili, and an astronomy club.

Most students are high school aged, though some come from middle or elementary schools (the latter must come with their parents). Their home countries include Somalia, Sudan, Syria, Eritrea, Congo, Tanzania, Rwanda, Iraq, Syria, Mexico, and Vietnam. Even students from the United States attend, there to accompany friends.

The locale creates opportunities for cultural sharing, Kasper said. The music and dance club, for example, mostly made up of students from Burundi, Tanzania, and Congo, creates space for this, Kasper said, “It brings them incredible joy to sing and dance,” she said.

Volunteers also help facilitate cultural exchange. “They can be helping with a homework assignment and the conversation turns to how this particular lesson is relevant or not, either in the States or in their home countries.”

One evening, Kasper was helping students from Rwanda with their homework. How do you say this in Kinyarwanda, she asked them. “We pulled up an app and looked it up. Then the girls said, laughing, We’re forgetting our language, we need to practice.”

Students from Syria sometimes help each other with homework assignments in Arabic, Kasper said, an exchange that gives kids an opportunity to access and share their own skills and talents.

The travel ban implemented by the Trump administration has had an impact on the students, Kasper said. “The hardest thing for the kids is when family members are expecting to be reunited and now don’t know when that will happen.”

But kids are resilient. Kasper noted that she herself was struggling with the news of the first travel bans. “The first kid of the day walked in and I asked him how he was. Fine. His family? Fine. Then he said, ‘Miss, I have math homework to do.’ So really they just want to continue their normal life. They have work to get done and pictures to draw and songs to sing.”

Fortunately, thanks to the LSS-SW afterschool program, they can get to it.

Refugee Youth on the Radio

Lastly, we want to shout out to the mini-program, Mn Huna: Finding Refuge in Friendship, which airs weekly on KXCI Community Radio in Tucson. Hosts Houda, 19, a Syrian refugee who came to Tucson in July 2016, joins Melanie Cooley, a member of the group Arizona Welcomes Refugees, where the two met. Both women love writing, literature, and stories, and came together to host conversations with people who have been resettled in Tucson as refugees.

Beyond Homework: Giving Refugee Youth a Sense of Belonging through Art, Nature, and Community