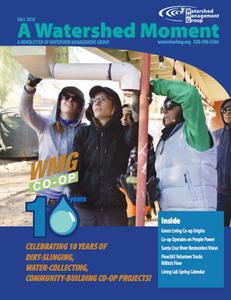 Over a decade ago, when rainwater harvesting was just starting to become a Tucson trend and steel rain tanks were all the rage, the idea of creating our Co-op program originated from volunteers during a weekend workshop at the Ward 3 Council Of ce. We were installing a rainwater harvesting tank, and one volunteer got so jazzed about the workshop, they said they’d like the same thing at their home. Other volunteers perked up and said they too would be interested in hosting a WMG workshop. So we got to brainstorming right away how the program might work for residential properties.

Hence the Co-op was born – and we tested out the model with our rst devoted hosts in 2008, including Matt Lowen, Ian Johnson, Megan and Chris Mogan, Charles Swanson, Ron and Marti Kuykendall, Michael Goldman, Richard Roati and Susan Silverman, Martha Retallick, Catlow and Lisa Shipek, and Laura Mays.